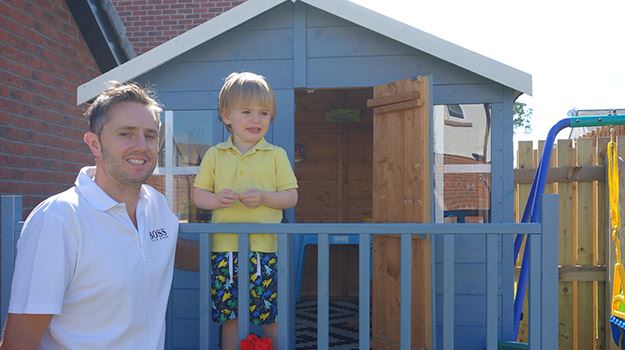 When Ryan Wilson moved into his new Story Home at Summerpark, Dumfries, he decided to take his blank canvas garden and turn it into something really special for the whole family…

With Summer upon us, what better way to spend your time than making your garden a great place to be? When Ryan Wilson moved into his new Story Home at Summerpark, Dumfries, he decided to take his blank canvas garden and turn it into something really special for the whole family.

Ryan, 42, spent three months transforming his turfed garden, building a pond, a play area, and a grownups entertainment area, complete with a TV screen to enjoy the World Cup. Ryan, wife Lisa, 35, two year old son Reuben and newborn baby Noah, can now enjoy their garden, including the admiring comments from the neighbours.Ryan said: “I have always loved gardening, a hobby I picked up from my dad. I’m pretty much self taught and do gardening in my spare time as I work for Gates Power Transmission and have done for 23 years. My specialism is probably ponds and water features and I like to buy unique plants and shrubs.

“I wanted to create a garden which the whole family could enjoy. I didn’t want the kids to think that they couldn’t kick a football around without getting in trouble! The main aim was to achieve a low maintenance and child friendly garden which could become an extension of our new home.

“I spent around three months of my spare time from March 2014 creating a pond with lights, mist, a water feature and jigsaw design paving, and covering it with a child proof net. We have some fish in there and we have seen dragonfly’s and butterfly’s around. The new bird boxes should also attract more life to the garden too.

“The play area has a swing, slide and playhouse for Reuben which he loves playing in. This is right next to our more grown up patio with table and chairs, a TV screen and a stove which can be used as a pizza oven. We have already had friends and family around for a few evenings of World Cup entertainment.

Originally from Dumfries, Ryan had moved to Motherwell and started his own gardening business, undertaking contracting work for developers. It was here that he won a gold prize from Lanarkshire Council for his garden, collecting his accolade from the Civic Hall. During his time in Motherwell, Ryan set up a part time business improving his neighbour’s gardens and the local area, helping to improve the neighbourhood. After moving back to Dumfries and purchasing an Auchen house type in September 2013, Ryan set about planning his own garden project.

He added: “We chose this house for the plot as it is so big. The garden was a great space and a blank canvas for me to work on. Before starting, I planned it all out on paper and included the front entrance with a lavender hedge with a great fragrance. The wisteria in the back garden will start to grow right up the wall, with beautiful blue flowers, an apple tree will grow to disguise the garage and I have hanging baskets to add colour. I have also included fern hosta’s, old tree stumps to add character and hardy palms suitable for the local climate.”

Ryan already has plans to work on his gardening further. He said: “Next year when it’s more established, there will be places for the kids to play and hide. We want to add a sunroom too with infinity decking so the garden is going to be a real work in progress. Some of the neighbours have also been admiring the garden and asked me to do a small project in their garden, finishing it off with a water feature.”