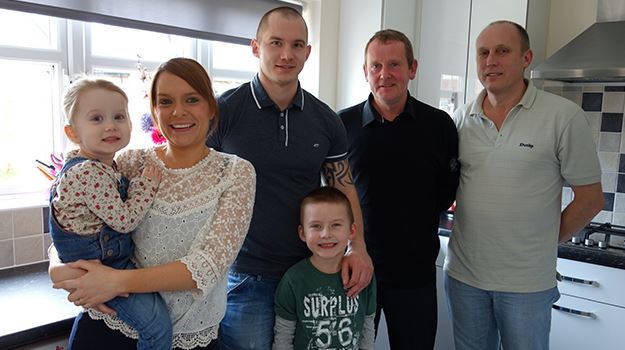 It really is a family affair at Summerpark, with three branches of the same family all living on the Dumfries development!

Andy McCulloch, his dad Alan and Alan’s brother Brian have all purchased their dream Story Home at Summerpark. After a year of all living so close together, they are still close and love the perks of being neighbours as well as relatives. From family BBQ’s to babysitting opportunities, they are yet to see the downside of living close by at Summerpark.

Uncle Brian was the first of the McCullochs to move onto Summerpark in 2011. Fireman Brian lives in a four bedroom detached ‘Carlisle’ house type.

Brian, 50, said: “We moved here in 2011 and had the family round to visit now and again. We were delighted with our house and the family loved it too. They started to see the development grow and that’s when my brother Alan started talking about moving here too. I really like the fact that the houses are not all one style or finish and they don’t sit in a boring looking straight line.”

Brian’s older brother Alan, 53, works as a transport manager for a local food company. He moved to Summerpark in 2012 after buying a three bedroom semi-detached ‘Carrick’ house type. Alan said: “When I first moved here I was downsizing and I worked away a lot so I didn’t see much of Brian. Although we were on the same development, it was only now and again that we would get to spend any time with each other’s family. It was evident to me and to the family that Story Homes offer great value for money and the quality speaks for itself when you compare it to other new homes. The after sales service was great too which makes living in a new home much easier. My son was keen to move and when he saw my new house he decided to enquire about living on Summerpark too.”

Alan’s son Andy, 30, along with his fiancée Emma, 27, and children Aiden, 6 and Sophie, 3 started visiting Alan after he moved in and they too were taken by the style, space, quality and finish of a Story Home. The couple decided to take a look around the show homes at Summerpark and it was there that they set their hearts on a four bedroom detached ‘Braemar’ house type. Andy, who works for a local printing company, and nurse Emma moved into their new home in 2013 and soon found that there were perks to living close to the children’s Papa.

Andy said: “The kids love having the family so close by. We can let them go across to visit my dad and uncle and my younger sisters, who are 14 and 16, often pop by when they are at dads. It’s great for babysitting and last summer we were able to have a lot of family BBQ’s at short notice when the weather was so good.”

Since moving in, Emma and Andy’s friends have also decided that Summerpark is the place to be. The couple now have a number of friends living close by and some others who are in the process of buying their dream Story Home after visiting the McCullochs. Emma said: “It’s great having everybody so close by; family and friends. We haven’t seen any negatives to living so close by just yet! We are all really excited about getting the new park and the new family pub too as it means we get to spend even more time together.”