The annual Carlisle United Football Club Golf Day was once again a great success. The sun was shining for this brilliant day hosted at Carlisle Golf Club. 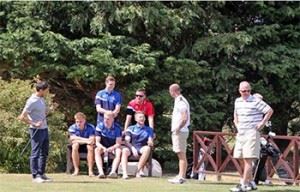 Carlisle United players and manager on the tee box

Both morning and afternoon tee-offs were available at this prestigious event and included entries for a team of four in a four-man, four-ball, better-ball competition. Participants were greeted with bacon rolls and coffee on arrival as well as a two-course buffet at the end of the competition. Prizes were handed out to the participants and eventual winners of the day. 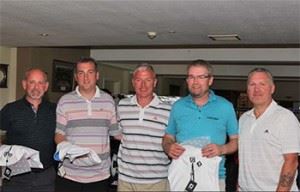 Competitors being awarded their prizes

Carlisle Golf Club is less than ½ a mile from the M6 and Junction 43. It is situated amongst mature trees in gently undulating parkland and is one of the most attractive courses in Northern England. The R&A brought regional qualifying to Carlisle on 6 occasions, the first club in Cumbria to be honoured with this. It has also been host to the English Seniors Championships in 2010; one of many competitions held here in its 100 year history.

Located not far from Carlisle Golf Club is Story Homes’ Alders Edge development in Scotby. This stunning collection of 45 two, three and four bedroom, high quality properties has been designed with the Story Homes’ signature traditional appearance. The attractive street scenes allow for the development to blend in with the beautiful surroundings of the village and provide modern living in a rural setting.

Story Homes look forward to participating in the annual golf event next year. Our support is with the club for the upcoming season; which can hopefully be as successful as last weekend’s Golf Day!