We have secured planning permission for a development of 283 homes at Cottam Hall, Preston.

The development which is our first scheme in Preston, is situated to the south of Cottam Way and north of the Lancaster Canal.

It will be known as Waterside, due to its attractive location overlooking the Canal, and will offer a mix of two, three, four and five bedroom properties.

Story Homes’ Chief Executive Steve Errington, said: “We are delighted to be delivering our first scheme in Preston at Cottam Hall. We believe the Story Homes offer is different to that of other developers currently active in the area and we believe our product will be something new, but also very much be in keeping with the Preston market. We are also keen to promote the local job and supply chain opportunities which will be created as a result of this development.”

Cottam Hall is the third of 11 development sites owned by the Homes and Communities Agency which are being developed as part of the Preston, South Ribble and Lancashire City Deal. The City Deal was agreed between Preston City Council, South Ribble Borough Council and Lancashire County Council, along with central government and the Homes and Communities Agency (HCA). 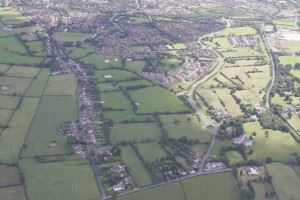 Jim Carter, Chair of the City Deal and board member for the Lancashire Enterprise Partnership, said: “Our City Deal will create thousands of new jobs over the next few years, growing the local economy by over £1bn and making it an even better place to live. Alongside these new jobs, we’ll need to make sure that new homes are built to meet future needs This development at Cottam Waterside will help us to realise our economic vision for Central Lancashire. As well as creating jobs, new roads and new homes, City Deal is also about developing our communities. The delivery of new community infrastructure will be important part of the success of Cottam.”

At Cottam there will be a new park, multi-use games area and the creation of amenity space. £328,000 is also being contributed towards the improvement and joining up of the southern side of the Lancaster Canal towpath which will benefit a much wider area than just Cottam.

Councillor Peter Rankin – Leader of Preston City Council said Preston is a great place to live and work, which is why more and more people are choosing to live in Preston.  Through City Deal we can keep up with demand and allow the city to grow and develop.  We can now unlock Preston’s true potential and put in place the necessary infrastructure for the homes, offices and communities of the future.  We really welcome this investment and new development by Story Homes which is one of the first significant housing developments to be realised by the City Deal.  Momentum is building and it’s an exciting time for Preston, South Ribble and Lancashire.”

Story Homes are due to begin work at Waterside in early Autumn 2015, once important ecological works have taken place. This includes catching and relocating Great Crested Newts to a safeguarded ecological area, where two new ponds have been specially constructed.

Future phases of Cottam Hall, which is a 150 acre site with an overall outline planning permission for 1,100 homes will be brought to the market over the next few years. Barratt Homes are currently on site delivering 104 homes which are progressing well.

Stuart Sage, from the Homes & Communities Agency, said: “At Cottam we developed a really good working relationship with Barratt and more recently we’ve been working closely with Story Homes, who are an important partner of the HCA.  Story Homes are already on site at Lancaster Moor, another key HCA-owned site and the development there is proving popular, so it will great to see them replicate that success for the next phase of the Cottam masterplan.”