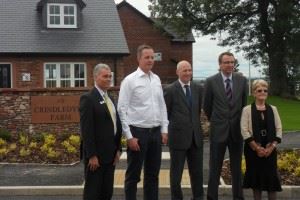 The Government Planning Minister Nick Boles has been on a visit to Carlisle’s newest housing development and praised the high quality and finish of the new build properties.

The statement is a turnaround from his previous comments on the quality of some new housing.

Story Homes’ flagship development in Carlisle, Crindledyke Farm, is an Urban Village, offering a number of benefits to the city and surrounding area. The site has outline planning permission for 850 properties. Work started on site in 2012, with the first occupation taking place in July 2013. Many of the properties on the first phase are already purchased or occupied. The site will also feature a school, community open space and small retail units.

Nick Boles praised the quality of Crindledyke Farm and highlighted it as an example of excellence which should be replicated throughout the industry. He said:

“I think it’s very important and very welcome that the local authority has produced their draft local plan and I hope that everybody in the community will bring forward their views about that plan.

“I have come here to support John Stevenson the local MP and in particular his campaign to get Carlisle growing. They are really making an effort to build houses that people are proud of and neighbours will be happy to have alongside them.

“What we need is responsible house builders who are willing to put a little bit of extra money into building a really beautiful development because that will mean that more people are happy to see more houses built.”