Pupils from five local schools have taken part in a sports festival to celebrate a year of coaching success within their schools. 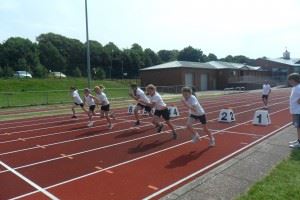 The festival day, which included team sports and individual track races, was supported by coaches from Carlisle and District Sport and Physical Activity Alliance Foundation (SPAAF).

The SPAAF coaches have spent half a day per week working with the children in their own schools, teaching them new sports and encouraging them to get involved in physical activity. They promoted health, hygiene and fitness alongside confidence, self esteem and motivation to achieve and succeed in sport.

The festival day, held at the Sheepmount in Carlisle, kicked off with an opening ceremony, with the schools each showcasing their own flag designs.

The morning saw team sports including football, hockey, rounder’s and basketball, with the pupils mixed together into four groups to develop new and existing skills as well as play games.

After lunch, all of the pupils took part in two throwing events, one jumping event and a 60 metre sprint with more of an emphasis on competition. The four events were measured and timed to finalise the top eight participants. The day finished with a 400 metre fun run before the presentation of certificates and medals. 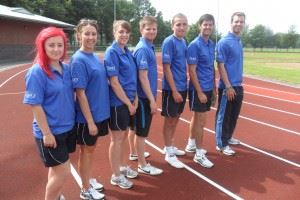 Feedback from the schools participating in the sports partnership, which aimed to continue the Olympic legacy, has been extremely positive. Many of the children say that they wish to continue learning the sports they have had a flavour of.

Fred Story, Chief Executive of local company Story’s said: “The partnership has been a fantastic success and the festival day was a great way to celebrate and let the children show off their new sporting skills. Sport, participation and confidence are all important and I have watched some fantastic effort here at the festival. Most importantly though, all of the children have given their all and had fun along the way.”

Story Homes will continue to fund the scheme after the summer break and the Government have also announced additional funding for primary schools from September 2013.