Steve Errington, chief executive at Story Homes, test drives the BMW i8 and finds an all-out supercar with hybrid credentials.

A sports car built using hybrid technology – surely not? At least, that’s what I thought upon clambering into the driving seat of the BMW i8. The experience is much like entering the cockpit, in which you’re surrounde 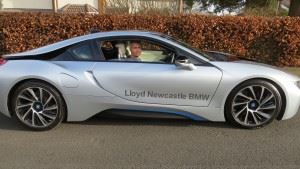 d by all the toys you’d expect plus two high definition screens which display the speedo, rev-counter, energy-use and navigation functions.

Beyond the futuristic, head-turning looks, this car harbours an advanced plug-in hybrid powertrain and a 228 brake horse power engine – the same used in the MINI – and a 139bhp electric motor.

I’ve driven sports cars in the past where it’s felt like trying to tame a wild animal.
They can be quite hard to drive, but this really is a feat of engineering. The i8 is fun whilst being easy to drive.

On paper the car boasts 0-62 mph in 4.4 seconds and a top speed of 155 mph – not bad for a car with such eco-friendly credentials. To add to the sense of futurism, you hear no engine or exhaust sound when you put your foot down in electric mode.

Sitting almost on the ground, between the sleek curves and mean looking wheel arches you really get the sense that you’re driving a tough sports car. There’s plenty about it that says classic roadster, but also some unusual twists and turns that make it stand out from the pack.

It certainly turned heads when I took it around town. And that’s the beauty of this car. It’s a performance beast for the open road, but in town it’s a joy to manoeuvre – and to park. The gull wing doors are less gimmick and more functional design. The opening range is no more than that of normal doors and it makes for a surprisingly easy climb in and out from behind the wheel.

Parking could have been blighted by the low seating position and limited rear window, but a reverse camera fills in the blanks for you.

On the motorway you can open it up into “sports mode” which keeps the petrol engine running all the time while also charging the electric motor and engaging sportier drive settings. The handling is smooth and the car feels nimble but assertive on the road.

I drive a BMW X5 SUV day-to-day, and after the 24 hour test drive with the i8 it felt very sluggish in comparison. That said, the X5 is a practical car in a way the i8 is not. While my 13 year-old son enjoyed his passenger experience in one of the two back seats, it would be a struggle to fit the rest of the family in – and a dog.

As you’d expect, the i8 is right at the forefront of gadgetry offerings. Your speed is projected on to the windscreen and, cleverly, it’s only visible to the driver. The feature means you don’t have to take your eyes off the road. My iPhone linked seamlessly with the in-car system and the Sat Nav was straight forward and intuitive.

Overall the i8 is a miracle of engineering – an all-out supercar in a hybrid package. You also get a car with great fuel economy. I got 35-40 miles per gallon in my test on a mix of local roads, which is astonishing for a sports car. The official average fuel consumption rating is 134.5 mpg, which is an exceptional performance – made possible by the electric and fuel power mix. This really is a car of the future, today.