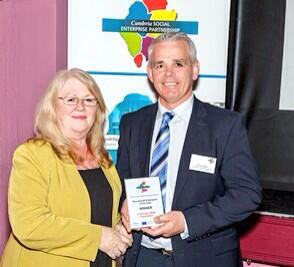 The Sport and Physical Activity Alliance Foundation (SPAAF) won the duo of awards at a ceremony on Monday 28 April. SPAAF was named Best New Social Enterprise in Cumbria and Development Manager Garry Schubert was named Cumbrian Entrepreneur of the year.

They scooped the awards after demonstrating their contribution to community involvement and job creation throughout the county, as well as robust planning, monitoring, policies and training.

The awards ceremony in Cockermouth celebrated and honoured social enterprises throughout the county. Co-operatives and Community Enterprises were also recognised.

Story Homes has been running a school sports programme with SPAAF for two years, funding sports coaching in nine Carlisle schools. Story Homes support allows SPAAF to deliver weekly sessions to the schools, culminating in a sports festival to celebrate all that the pupils have learned.

The programme was set up by Fred Story and SPAAF in 2012 to keep the Olympic Legacy alive as well as teach new skills and allow children to stay healthy, have fun and practice teamwork through sport.

SPAAF also won another award earlier this year and were named Best Social Enterprise in the North West. For more information about SPAAF click here.

To read about Story Homes work with SPAAF, click here.