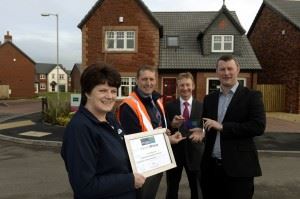 Medium Development of the Year & UK site Manager of the Year Awards Presented to Summerpark, Dumfries

Dumfries’ biggest housing development has been presented with three prestigious awards for excellence.

Premier Guarantee has named Summerpark as the Medium Development of the year both regionally and nationally. Summerpark’s Site Manager Barry Mattinson was also awarded the UK site manager of the year accolade.

The annual Premier Guarantee Excellence Awards 2013 recognise the best developments in the UK housing market and Summerpark was up against other national house builder’s developments across the UK. Premier Guarantee Business Development leads Neal Doggett and Dan Hodgson visited Summerpark to present the awards to Barry and sales advisor Ann Taperell, as well as some of the site staff.

The current phase of the Summerpark development (Phase H8a) was shortlisted in the Medium Development category after a thorough assessment from a Premier Guarantee site surveyor. Site Manager Barry, responsible for the overall running of Summerpark, was automatically entered into the site manager of the year award category.

Barry, 41, has worked at Story Homes for ten years and has been the site manager at Summerpark since phase H8a started in August 2010. The Summerpark development will now automatically go forward into the British Homes Build Quality Awards 2014.

Steve Errington, Managing Director of Story Homes said: “We are very proud of our Summerpark development and the number of happy customers already living on the site is testament to its success. The Premier Guarantee award for the development and also the award for our site manager Barry Mattinson are fantastic examples of industry recognition for our work, putting us up there at the top with the very best in British house building.”

Mike Swatton, Head Judge for Premier Guarantee said: “The Winners revealed some outstanding quality from the country’s best developers. What was evident from this years winners was the very high standards of finishing complimenting outstanding design and modern materials.”

Summerpark is currently the largest development site in the region, nestled next to Fountainbleu and Ladypark Nature Reserve on the eastern edge of Dumfries. The development started in 2006 and over 100 properties are now complete and occupied, with the community surrounded by established trees and greenery, and benefiting from plans for community facilities and green open space. The next phase of the development, 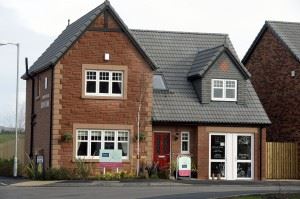 which includes new house types, is due to launch imminently.