Work has started on a development of new homes in Galgate which will deliver affordable homes and create over 30 jobs for local people. 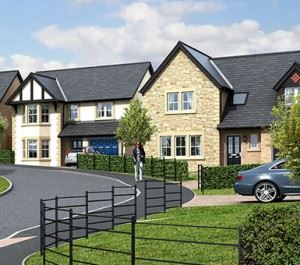 The development of 71 new family homes in Stoney Lane will see a mix of two bedroom apartments and two, three and four bedroom semi-detached and detached houses built by Story Homes.

Up to 40 per cent will be ‘affordable’ — designated for local people and the proposed development is expected to create upwards of 30 jobs for local people during the construction phases. The initial work will be to erect fences, a compound for offices, plant and material and site access points, as well as preparing the ground for sewers.

“The first phase is all about preparation and making sure the site is safe and secure,” says Story Homes site manager Ian Wilson.

Once complete, the site will also include a public open space and play area, which the whole community will be able to use.

Plans to build on the site were approved by Lancaster City Council in June subject to a legal agreement which was completed last month.

“We are looking forward to working in Galgate and bringing more of our high quality homes to the Lancaster area in the very near future.”

The development will create a number of employment opportunities for local contractors, with positive knock on effects for the local supply chain and other local businesses and services.

Story Homes currently has ongoing projects in Lancaster and Kirkham, with others in Clitheroe, Preston and Cottam in the pipeline. It is also looking at potential developments in Manchester and Cheshire.

The company plans to employ a further 43 full time staff over the next 12 months as part of a three year strategic recruitment plan which will eventually see well over 100 jobs created, with additional work for sub-contractors and key trades.