The team beat Wales and Scotland 5-0 to win the Home International Fixture held in Aberdeen.

Diana credits her improved form, which has led her to take captaincy of the team, to her working week at Story Homes’ head office in Carlisle.

She said: “I moved up to live in Cumbria during the week away from the family home in Manchester – which has given me plenty more time to focus on the sport.

“Since joining Carlisle Squash Club I’ve had excellent support in terms of improving my game and I can pinpoint that improvement on joining the team at Story Homes in August last year.” 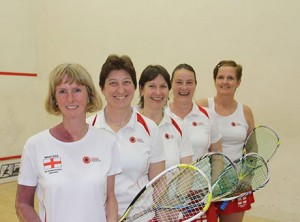 Diana Parums, Health and Safety Manager, second from right with the England team

Diana lives in Skelton, Penrith, during the week and returns to her husband Simon, 49, in Dunham Massey, South Manchester, at the weekends. She has two grown-up children James, 24, who lives in London and Rebecca, 23, who lives in Sheffield.

She said: “I’ve been playing squash since I was about six and taken part in many tournaments since.

“But this is the first time I’ve ever won a national title. It was the pinnacle of my squash career following a season of gaining qualifying points to play on the England team. I’ve played for the England team five times before but this was my first time as captain.”

“Winning the national title was the best moment of my squash career without any doubt. It was the result of a lot of hard work – and great support from both my adopted squash club, Carlisle and my home Club, Bowdon.

“I shall definitely be returning to defend the title in next year’s tournament.”