The pupils and staff of Petteril Bank Community School, Carlisle warmly welcomed several ‘dragons’ from Story Homes to a presentation at their school this morning (Tuesday 24 February). The pitch was to raise sponsorship money for a kit car race event that they are holding in March as part an entrepreneurial project that they are undertaking.

Fred Story, Chairman, Steve Errington, CEO, Fran Stott, Head of HR and Shelley Hayward, Learning and Development Manager attended the presentation held by the children of Years 5 and 6 – ages 10 to 11.

The school children are taking part in the Bright Stars project organised by the Centre for Leadership Performance which encourages young people to learn new skills through entrepreneurial work. Keen to encourage the young business leaders of the future, Story Homes has been working alongside the school children and their teacher, Sarah Lee and Shaun Weatherhead from U Can Shine in a bid to win a county wide competition. 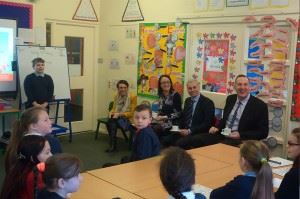 Today Caine Kelton, 11, was definitely the star of the show! He calmly and confidently presented to the panel of ‘dragons’ who needed to be persuaded to part with their cash. The enterprise idea was passionately explained, together with their business plan and projected income streams.

Fred Story was more than complimentary of the pitch: “I came along today thinking that we would ask lots of questions and make you work hard for your money, but you have surprised me. This has been the best ever pitch : it’s really powerful, what you have done and you should be extremely proud of yourselves. This project has started off with what interests you at heart and you’ve used your strengths to take this forward. The same can be said in business.”

After asking several questions of the pupils, it was then the turn of the children to quiz the panel.

Jack was first to put his hand up and eagerly asked Fred Story what inspired him to work for himself. Fred’s answer was inspirational to say the least: “I wanted the freedom of working for myself. I wanted to be in charge of my own destiny.”

The next question from a confident Sam was: “What do you like best about working for Story Homes?” Steve Errington picked this one up: “I love the great product we produce. We focus on the customer just as you did in your presentation. We’re a family owned business which means we can look to the long-term instead of short-term quick profit. We do things properly; just like you have with this project – you haven’t chosen the easy option in just asking for money, but have presented to us in a professional way.”

Fred finished off the question and answer session with sage words: “Find a career you enjoy with an end product that you’re proud of and everything will fall into place for you.”

Connor was the next to raise his hand and his question was very direct: “If you are going to sponsor one of our cars, how much will you give us?” This raised a laugh throughout the classroom and Fred responded by saying: “You’ve been very persuasive and I don’t think you’ll let us out of the room without handing over any money!” 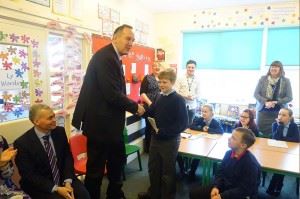 The ‘dragon’ hands over the well earned cash to treasurer, Jack.

After deliberating, the ‘dragons’ decided which car to sponsor (obviously the fastest) and the grand sum of £200 was handed over to Jack, the treasurer of the project.

As Evan Davis from the BBC series would say “It was a deal well done.”

The pupils are now branding their cars up and preparing for their race event which is being held on 10 March at the school.

To read previous updates on the school children’s journey so far, click here.