This February half-term, students Samuel Moore and James Costin are spending a week with Story Homes to gain significant insight into the world of work. The Dream Placement is organised by the Centre of Leadership and Performance and differs from the usual type of work experience; it’s focus being leadership. The students undertake tasks to gain the valuable knowledge and skills in understanding how business leaders work and the challenges they face.

Samuel, 16, from Energy Coast Technical College would like to undertake an apprenticeship after leaving school and has ambitions to work in either construction or engineering design, finally progressing to project management. He’s currently studying a wide range of subjects at school and is keeping his options open for the moment.

James, also 16, from Cockermouth School is keen to forge a career in accountancy and is also thinking about kick-starting his career with an apprenticeship as working his way up the ladder is important to him.

Both students had to undergo a rigorous interview procedure to gain places on the Dream Placement. Shelley Hayward, Learning and Development Manager at Story Homes played an integral part in this process and is an enthusiastic advocate of the scheme: “This opportunity for the young people of Cumbria is fantastic as it gives them the chance to pick up skills from leaders in successful businesses from across the piste, helping them in their career decisions and options.
“For Story Homes, this was an opportunity for us to connect with the possible business leaders of the future, encouraging them to engage with us as a future employer as we uphold our position as an employer of choice in the area.”

Day one
The students’ first day at Story Homes was a busy one! They joined in our corporate staff induction with all newcomers to the business. This involves new starters getting a feel for the culture and work ethic at Story Homes. Steve Errington, CEO, introduced himself to the group and spoke about the company’s aspirational plans for the future aiming to grow the business into a national house builder of quality and choice. Fred Story, Chairman, warmly welcomed the group to the Story family and talked about how important it is to maintain high standards in a company which is seeing continued growth and the challenges this presents.
Later in the afternoon, managers from across the business gathered to explain their roles and how they fit into the business, as James and Sam were introduced to their ‘mission’ for the week by the team who were going to support them through the process. The students have been given two plots of land and they have to research the opportunities and constraints for both with an overall decision at the end of the week of which plot they would recommend Story Homes buy.
Both students had enjoyed their day and were pleasantly surprised at how friendly everyone is! There was a lot of information to take in, but both agreed that this gave them a good understanding of how the business works and the challenges that it faces.

Day two
Today saw James and Sam visit the two plots of land with Jan Carruthers, Land Buyer at Story Homes. It was a dry but cold and breezy day as they visited the first site at Brampton. Upon arrival, Jan explained the process by which the land comes to the buyer’s attention and then after climbing the incline to view the whole of the site layout, explained the considerations that must be taken into account whilst undertaking the initial decision making, i.e. drainage, levels and access routes. Later in the morning, the second site in Penrith was visited in order to make comparisons.

The afternoon was spent deciding how many houses to plan for the site and which house types to use taking into account economic and demographic information for the areas. Head of Sales, Louise McGuckin introduced James and Sam to the market forces at play and encouraged them to ring estate agents to gain some insightful information.

Day three
This morning James and Sam have spent their time reviewing and discussing their findings. They are still undecided as to which plot of land which will go forward in their final recommendation – opinion is divided!

Reviewing and assessing their information in the think tank

Sam has thoroughly enjoyed his week at Story Homes and talks enthusiastically about his experiences so far: “I’ve found that I really like talking to people so yesterday ringing around estate agents was great. I have loved every part of the placement – it’s been a challenge but an interesting one. I’m really looking forward to sitting with the design and planning teams later today.”

For James, his future is high on his mind: “Throughout the week, I’ve been thinking to myself ‘Could I do this job every day?’ I’ve enjoyed it all so far and Story Homes is a really lovely place to work. I’m sitting with the Financial Controller later this morning and I’m really looking forward to that.”

The students have just returned from visiting our flagship development at Crindledyke Farm, where they visited a show home and seen works underway. They have even been filmed and interviewed for the showcase event in March which sees all employers and students gathering to celebrate their time together. 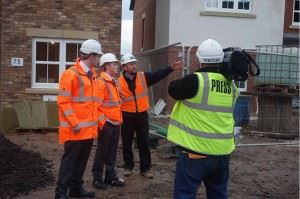 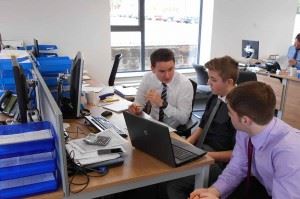 So, how much will it cost to build your houses?

Day four
After starting the preparation of the Powerpoint presentation for tomorrow, Sam and James met with Commerial Director, Simon Ashworth and Quantity Surveyor, Maryn Lawson. Discussions were based around the decision making process of sale rates for the house mix on their chosen plot of land. Martyn then explained the viability appraisal which is the process of reviewing cost against revenue. 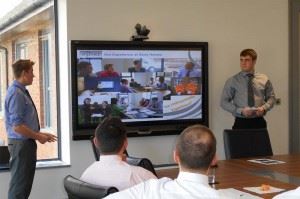 The mission is now complete.

James and Sam were well organised and their presentation to managers and senior managers was delivered in a considered and well thought out manner. The students had weighed up all the opportunities and constraints for the project and their recommendations were well received.

The students had showed real understanding not only of the task they were given, but the culture and ethos of the business. James said: “Everyone is so friendly, you can tell it’s a family business and new people are welcomed which means you can get on with the job really quickly.”

Our managers were greatly impressed with the confident manner of the students and how they had picked up on the quality, technical and financial issues in such a shorts space of time. Steve Errington, CEO commented: “I was so impressed at the level of detail and understanding shown by Sam and James at the end of just one week. It goes to show that if you get the right young people in the business, it’s amazing what can be achieved.”

On 18 March there is a showcase event at Energus for all businesses and students who participated in the Dream Placement project. We’ll catch up with Sam and James then!