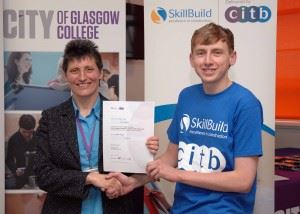 Ryan Gilmour with Carol Murray, Head of School for Construction, Engineering and Energy at City of Glasgow College

Ryan, of Ecclefechan, was representing his college in the Scottish final, competing against nine other apprentices in the Carpentry (senior) category held at City of Glasgow College.

After winning the Scottish final, Ryan will now go on to compete in the UK wide final in Birmingham in November.  If Ryan is successful he could progress into the World Skills competition.

The young apprentice was offered the trainee placement with Story Homes on the house builders Summerpark development in Dumfries three years ago. Ryan, whose Dad is a sub contractor for Story Homes, spent two years on a joinery course at Dumfries College before being recommended to attend another two years on an Advanced Craft Carpentry and Joinery course at South Lanarkshire College.

Ryan said of his success: “I didn’t expect to win at all. I also entered last year when I was at Dumfries College and it’s a really tough competition, especially as I was up against nine other apprentices and we were set a challenge to build a hipped roof joint. I’m looking forward to the UK wide competition later in the year and I only have one year left of my apprenticeship now and I’m hoping that I can keep working for Story Homes at Summerpark when I qualify.”

Richard Paterson, Ryan’s Course Tutor at South Lanarkshire College commented, “Ryan is an exceptional student and very worthy of winning this very prestigious award. We all wish him every success in the future and the College will support him in future competitions.”

SkillBuild, delivered by CITB Scotland, is the largest multi-trade competition in the country for construction trainees and apprentices. The highest scoring winners from the regional events are invited to compete in a UK national final in November. The heats were held during the 2014 Scottish Apprenticeship Week, organised by Skills Development Scotland to encourage many more employers to take on apprentices. 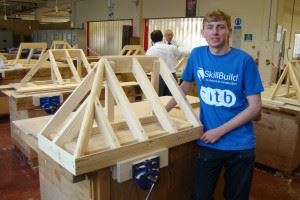 Ryan with his winning work

Graeme Ogilvy, CITB Scotland Director, said: “Scottish Apprenticeship Week gives CITB Scotland the perfect opportunity to showcase the many skills, occupations and opportunities available to young people who might be considering a job in the construction industry.

“We congratulate all the winners of this week’s SkillBuild heats, all those who took part in the competition and indeed the many partners who supported the superb event at City of Glasgow College.

“At CITB Scotland we provide gold standard apprenticeships that meet the needs of a hi-tech, world class industry with outstanding career prospects, helping companies skill-proof their businesses, invest in skills and plan for the future.”