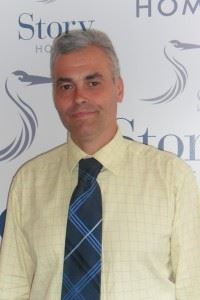 Steve Errington, who has been working as Managing Director for the Cumbria based company for 18 months, has been promoted to Chief Executive, responsible for the day to day running of Story Homes as it goes through a period of growth and expansion.

Fred Story, who founded Story Homes in 1987, will move into the strategic role of Chairman of the Board, overseeing the future direction of Story Homes as it doubles the number of homes it builds and moves into new geographic areas, with Steve Errington taking on the day to day responsibilities of the Homes business.

Steve Errington has been with Story Homes since July 2012, working closely with Fred as his Managing Director. Steve was previously a Finance Director with competitor Taylor Wimpey, based in North East England. After spending time working with Steve and witnessing his enthusiasm and drive, Fred has promoted Steve to Chief Executive of the family house building business Fred has nurtured since 1987. North East born and bred, Steve has aspirations to push Story Homes into the Top 25 UK house builders in the coming years.

Fred Story has grown Story Homes from a one man entity, building just a handful of houses each year, to a company which sold more than 150 homes in 2012/13. Fred has promoted Steve after watching his success as Managing Director, increasing the number of homes built and sold to 250 in 2013/14 and introducing new systems and processes to support the growth while retaining the reputation for quality and high specification.

Although originally a Cumbria based business, in recent years Story Homes has crossed into new geographical areas as the reputation for high specification desirable homes spread outside Fred’s home County. Story Homes has seen growth in Southern Scotland, North East England and more recently Lancashire. Despite the reported downturn in the market, Story Homes’ reputation has seen the company withstand the pressures and continue to grow out of the recession. This year, the business has almost reached the ambitious sales target of 250 homes, with predictions for 400 sales in 2014/15.

Each Story Homes development is unique and finished with stunning local stone and features such as the Story family crest. The Story Homes reputation in Cumbria speaks for itself, with 380 people joining a mailing list for the recently opened Whins Farm Close development in High Harrington, many queuing to be the first to buy at the launch event.