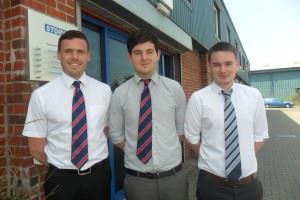 A Quantity Surveyor from local firm Story’s has been awarded four top prizes by Northumbria University.

Nicky, from Carlisle, has been studying part time for his BSc (Hons) Quantity Surveying degree as well as working full-time for the local contracting and house building company since 2008.

He said: “I put in a lot of hard work over the last five years but I really didn’t expect to receive these prizes on top of my first class degree. It was hard work, studying and working full time, and it is fantastic to receive this kind of recognition from the University and from the professional body RICS.”

Dr Kevin Thomas, Head of Department of Architecture and Built Environment at Northumbria University said: “Throughout his time at Northumbria University, Nicky consistently produced work, in both examinations and coursework, of an exceptionally high quality, this being particularly commendable in terms of balancing a busy academic workload with the demands of full time employment.

“He was awarded the RICS prize for Best Dissertation with his research into ‘The Impact of the Construction Act 2009 on the Cash Flow of SME Construction Companies’. This was commended by the examiners as being ‘a very detailed and rigorous analysis of a very important issue’. He was awarded a further three academic prizes, one for Best Overall Performance, reflecting his effort and dedication to his studies and all of the staff congratulate him on this fantastic achievement.”

Ian Wood, Commercial Manager for Story’s, said: “The awards Nicky has received are fully deserved as he has put in a great amount of hard work over the past five years. We are looking forward to Nicky having a long and successful career with us.”

Nicky’s success also led to a personal invitation from the Executive Dean at Northumbria University. who chose Nicky to attend a black tie celebration dinner, recognising his significant success and achievements during this academic year and throughout his studies.

They will all be presented with their degrees at a graduation ceremony later in July.