New aerial images taken of the Story Homes development Summerpark in Dumfries have shown how much the site has changed over the past ten months. With 43 plots sold since June last year, 25 of which are now occupied, Summerpark has proved popular with customers.

The development was the first of Story Homes’ sites Scotland and is the largest to date. Since the first customer moved in during 2008, the company has seen a total of 158 homes occupied during the first three phases of development. A total of 195 homes have been sold as a further 37 have been sold on phase 4.

Many home buyers are buying their new homes off plan, secure in the knowledge that they are buying a high specification house in a sought after area. With a new family-friendly pub opening in the autumn of 2014 and the development providing community facilities and green open spaces, the area truly has a community feel attracting many Story Homes’ customers.

For more information on our Summerpark development, click here. 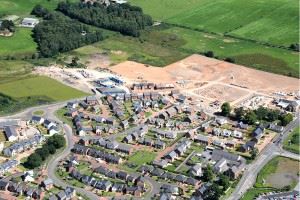