Discover the magic of a Story Home this Christmas

Poppy, age 7, from Carlisle is the star of a brand new Christmas video for Story Homes which sees cute and cuddly Builder Bear bringing the magic of Christmas alive.

Filmed in the striking ‘Sandringham’ show home at the Crindledyke Farm development in Carlisle, the video features a young family and their daughter moving into their new home at Christmas but they’ve not had time to put up the decorations or tree. That is until Builder Bear reveals the most magnificent Christmas surprise. 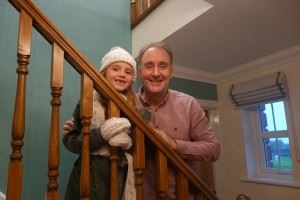 Budding young actress, Poppy attends Carlisle’s StagedRight Theatre, run by David McNeill and was delighted to be asked to feature in the video. “I’ve been going to StagedRight for a couple of years now and really enjoy taking part in the shows that we do. I was really excited when my mum told me that I was going to be in the video and it was lots of fun playing with Builder Bear and all the Christmas decorations” said Poppy.

Catherine Cannon, Marketing Manager for Story Homes said: “We had a great time filming the Christmas video; it was a really good fun. Poppy was an absolute star and loved her ‘new’ house and Builder Bear so her reactions to it were completely natural. We give a Builder Bear to every buyer of a Story Home and he has become a much coveted gift; naturally Poppy now has her own Builder Bear to look after her and make her Christmas even more magical.”

To launch the Christmas video, we’re giving one lucky person the chance to win their very own exclusive Builder Bear, which aren’t available to buy, by answering the following question:

How many stockings are hanging from the mantelpiece in the video?

To enter the competition and view the video follow this link

Some comments we’ve had on the video so far:

“Such a fantastic “feel good” Xmas film from Story Homes. We’ve watched it over and over again” – Cumbrian Newspapers

“This is a real Christmas cracker” – Viva PR