Dumfries development in the lineup for UK Top Development title

An award winning Dumfries housing development has made it through to the national round of an industry competition.

The Summerpark development, off Lockerbie Road in the town, has been named a ‘Top Development’ by warranty providers Premier Guarantee.

Summerpark is one of Story Homes largest ever developments, with plans for up to 900 homes, and in 2013 Summerpark won three Premier Guarantee Excellence Awards. The development was named the best development both regionally and nationally and Site Manager Barry Mattinson was also awarded the UK site manager of the year accolade.

The Top Development list is a further shortlist of the Premier Guarantee Excellence Awards. Chosen from the initial nominee list, only the highest quality developments are picked to be given this title. As a ‘Top Development’, Summerpark will now progress into the next judging where national finalists will be selected. 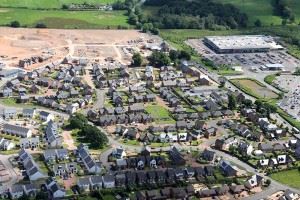 An aerial shot of this stunning development

The awards recognise the best developments in the UK housing market and site inspectors look at every aspect of the site, from health and safety to cleanliness.

Summerpark is site managed by Barry Mattinson, a Story Homes employee for more than ten years, Dexter Routledge, Production Manager for Summerpark said: “To be recognised in these prestigious national awards is a fantastic achievement.

“The work that Barry and his team put in to make this a great site has rightly been highlighted. A site as large as Summerpark wouldn’t be a success without each and every member of the team, including our sub-contractors and suppliers, as well as our customers who already live in the completed homes. We look forward to finding out if we are successful later this year.”

Summerpark is currently the largest development site in the region, nestled next to Fountainbleu and Ladypark Nature Reserve on the eastern edge of Dumfries. The development started in 2006 and over 120 properties are now complete and occupied, with the community surrounded by established trees and greenery, and benefiting from plans for community facilities and green open space.

Summerpark has previously won a number of awards for the development and for specific house types. These include the 2011 Premier Guarantee Excellence Awards, 2011 UK Property Awards, 2010 UK Residential Property Awards and the 2010 Scottish Home Awards.

For more information about the Summerpark development click here.