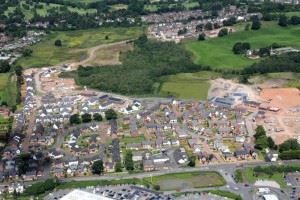 Summerpark from the air, June 2014

Dumfries’ largest development of new homes has been shortlisted for a prestigious national award.

Warranty provider Premier Guarantee has shortlisted Summerpark in the Large Development of the Year category.

Summerpark is one of Story Homes’ largest developments and has already been recognised with a number of industry awards. The annual Premier Guarantee Excellence Awards recognise the best developments in the UK housing market and Summerpark will be up against other national house builder’s developments across the UK.

Steve Errington, Managing Director of Story Homes said: “The Summerpark development has been popular since the very beginning and as people start to see the community facilities take shape and hear about the real community ethos on the development, more and more customers are visiting us and buying homes here through a recommendation from happy residents. We are very pleased to be shortlisted in the Premier Guarantee Excellence Awards as it shows that as well as being a great place to live, Summerpark is a great place to work too.”

Summerpark is currently the largest development site in the region, nestled next to Fountainbleu and Ladypark Nature Reserve on the eastern edge of Dumfries. The development started in 2006 and over 120 properties are now complete and occupied, with the community surrounded by established trees and greenery, and benefiting from plans for community facilities and green open space.

Summerpark has previously won a number of awards for the development and for specific house types. These include the 2011 Premier Guarantee Excellence Awards, 2011 UK Property Awards, 2010 UK Residential Property Awards and the 2010 Scottish Home Awards.