Story Homes has been able to help a girl’s football team in their successful bid to win their league. With sponsorship money, Allerdale Girls U15 team were able to buy brand new kit and match balls.

John Barber and a group of parents set the team up three and half years ago as his daughters wanted to play football and there wasn’t a team close to where they live in Workington for them to join. With no football experience, John has gone on to make sure that the Allerdale Girls team is one of the most successful in the county. 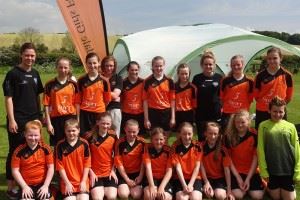 The team play in the Lancashire league and have gone on to win the league this season. This is not the only accolade that the girls can claim, having won the county Futsal and North West regional futsal championship. Their next challenge is to win the cup league where they will face Blackburn FC.

Allerdale FC is passionate about providing a competitive sporting team, but it’s not just about the winning. John says: “We have a friendly approach at Allerdale Girls team and we don’t just focus on winning matches, we provide a supportive and welcoming environment. Allerdale Girls FC are totally committed to be inclusive and includes girls from all backgrounds and abilities and have active non-discriminatory approach warmly welcoming everyone to the club. The help from Story Homes has been fundamental to achieving this goal by helping to keep costs down for its members”.

Allerdale Girls FC include four other younger teams from under eights to under fourteens who regularly train and compete in West Cumbria.

Story Homes is continuing its support for the successful club as they are sponsoring Allerdale Girls U14’s for the forthcoming 2015/16 season.

Story Homes supports many community projects and prides itself on helping out in the areas where its developments are located. For more information on projects and good causes that have been supported, click here.