The Chief Executive of the Homes and Communities Agency (HCA) has given his seal of approval to Story Homes first ever development in Lancashire.

Andy Rose, along with Executive Director Deborah McLaughlin and Area Manager Hazel Cooper, visited Story Homes’ High Wood development in Lancaster to see how the site has progressed since the HCA sold it. 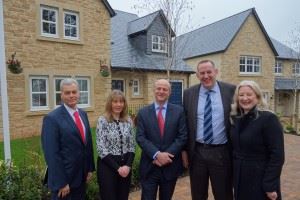 The HCA is the national housing and regeneration agency for England, contributing to economic growth by helping communities to prosper and delivering high-quality housing that people can afford. The HCA sold the land to Story Homes in 2013 after owning it for a number of years following the closure of the Lancaster Moor hospital.

The HCA commented on the surroundings at High Wood, including the impressive driveway approach, as well as the style, design and quality of the properties being built. Story Homes have worked closely with the HCA to ensure the successful redevelopment of the area into a new community.

High Wood is a development of 197 high quality and high specification new build homes. The sale of the land from the HCA to Story Homes also enabled the redevelopment of the Grade ll listed former Lancaster Moor hospital building into apartments by a separate company. The High Wood development is Story Homes’ first scheme in Lancashire.

Two show homes opened at High Wood in March 2014, although 25 of the properties had already been sold off-plan to eager customers who had followed the progress of the development and were keen to live at High Wood thanks to its rural location. The first residents are due to move in later in April 2014.