The graduate scheme is one of the few of its kind in the construction industry, and is designed to bring new talent into the sector. In its inaugural year, the placement scheme attracted hundreds of applicants keen to work with Story Homes across its operational divisions.

The three successful candidates were Jack Taylor (21) from Maryport, Cumbria, Stacey Gray (22) from Glasgow and Martin Nugent (26) from Carlisle, Cumbria.

Following an intensive period during which the three new recruits will spend time in each part of the company’s operational areas, Jack will work in Story Homes’ sales department, and Stacey will take up a role with the buying team. Martin has joined the planning department. 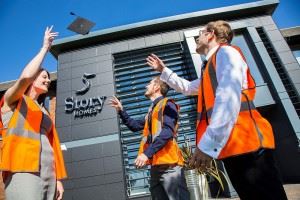 The graduates celebrating outside Story House

Speaking about his appointment, Jack said: “As a graduate, opportunities to join a large business are few and far between – and finding such a nurturing programme as the Story Homes’ graduate scheme is even rarer.

“No other construction company or property developer I researched had a graduate scheme like Story Homes, so it was great to be asked to the assessment centre and even better to be offered the position.

“I know Story Homes isn’t investing in the graduate scheme to look good – my fellow graduate colleagues and I are here to learn but, more importantly, to add value to the operations of the company.”

Story Homes is one of the fastest growing house building companies in country, and is currently delivering high-quality homes across 18 active development sites in Cumbria, the North West, the North East and Scotland.

As well as recruiting head office staff, such as the three graduates, Story Homes is actively seeking significant numbers of skilled tradesmen to work at the development sites. Find out more here.