The staff at Appleby Primary School takes the health and safety of their pupils seriously and invited us to along to the morning assembly to talk about the dangers that could be encountered on building sites. With a new Story Homes’ development now underway in the village, promoting safety messages to local children is key for the business, as we are always keen to support communities where we work. 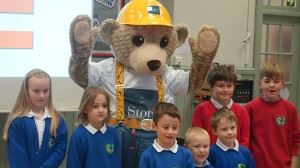 Cuddly mascot, Builder Bear made his debut in front of the children from Years 1 to 6 and entertained the children in a fun way while promoting safety messages. With an emphasis on keeping children safe and out of building sites, the pupils were shown a DVD which warns of the dangers which they could be faced with if they were to enter a site unaccompanied.

Health and Safety Advisor for Story Homes, Sean Trodden, spoke to the pupils about the significance of the lessons they learnt from the film – reaffirming the messages portrayed in the DVD.

Builder Bear was then warmly welcomed by the younger members of the school community, as he visited the nursery and Reception children in their classroom. The children confidently took it in turns to shake his hand and talk to him. They were then gently informed of the message to keep away from building sites to keep them safe from danger.

The children and Builder Bear enjoyed the visit and Story Homes’ staff will organise an educational visit to site for some of the children and staff at a later date. 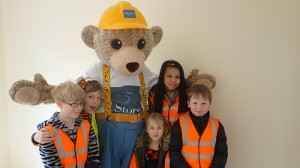 Later in the week, the children of Lazonby Primary School visited the new development in their village, The Meadows. Greeted by Builder Bear at the door of a Story Home, the children giggled and played with the friendly mascot. After they donned their hiviz jackets, he welcomed them into the house where he entertained the pupils. 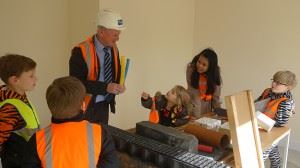 Afterwards, Sean Trodden showed the children the different types of materials involved in the building of new homes. This fascinated the girls and boys, a mix of year groups from 2 to 6, and they asked lots of relevant and pertinent questions. The next lesson to learn was health and safety and the possible dangers faced on building sites. Again, the children listened well and took all lessons on board, showing interest and acknowledging what could befall someone entering a site.

They visited the newly opened show home, where Diane Gilbertson, Sales Executive, showed everyone around. This really impressed the children and most of them wanted to move in there and then and most of them are now saving to buy a Story Home!

Our new development, Orchard Place in Appleby is beautifully situated in the picturesque village with local amenities close to its doorstep. The high specification 2, 3 and 4 bedroom homes have been in demand from buyers across the UK – to read more click here.

The Meadows in Lazonby recently seen its first occupants to the new development – to read their story and find out why they were attracted to a Story Home, click here. With a mix of 2, 3 and 4 bedroom homes, the development is set in the pretty, scenic village which is on the famous Settle to Carlisle railway line and is renowned locally for its heated outdoor swimming pool.