A sports programme inspired and funded by Story Homes has been shortlisted for an award at the CN Group Golden Apple Awards 2015.

The School Sports Programme, delivered by the Cumbria Sports and Physical Activity Alliance Foundation (SPAAF), has been shortlisted in the Sporting Achievement category of the awards, which recognise education achievements throughout Cumbria.

The sporting achievement award recognises an organisation that can demonstrate an outstanding commitment to encouraging its members or students to be active on a regular basis with a wide participation in sports and other physical pursuits and/or achieving success in those activities.

The Story Homes school sports programme is about to head into its fourth year and allows hundreds of local children to gain access to weekly sports coaching sessions in their school. 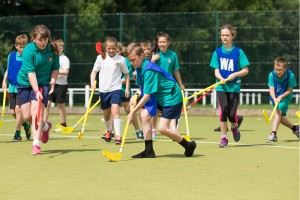 The idea came from the 2012 Olympic Games and Fred Story put funding towards sport in schools in the hope of keeping the Olympic legacy alive.

Since then, the scheme has grown annually and now nine schools across Cumbria benefit from weekly coaching sessions, aiming to raise the aspirations as well as their health, fitness and sporting skills.

The Story Homes and SPAAF scheme is up against other worth contenders including: Beckstone Primary School, Harrington, Workington, James Rennie School, Carlisle and North Walney Primary School, Barrow-in-Furness.

The awards ceremony will take place at Carlisle Racecourse on Friday 2 October 2015 where the winner will be announced.