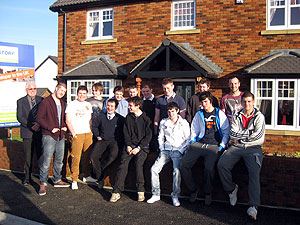 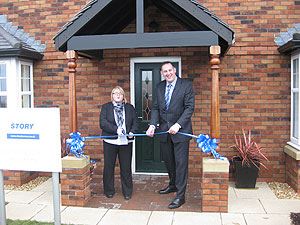 The three-part TV series, to be broadcast on ITV4 starting on March 19, follows the team of 22 rookies as they spent a year building the detached property under the guidance of senior staff on our superb new Magellan Park development at Whitehaven.

Many of the apprentices aged 16-24 had been recruited at a jobs fair in Whitehaven in June 2010, including some school-leavers or unemployed youngsters.

As they learnt their respective trades as bricklayers, joiners, tilers etc, the raw recruits were challenged to build a house on their own, under the expert supervision of qualified staff, inside 12 months – they completed it 10 weeks earlier than planned!!

Work on the house started in January 2011 and over the following year, every stage of construction was filmed for the TV series, from the foundations being dug to the house being fitted out by the apprentice plumbers, electricians and painters and decorators from Whitehaven, Workington, Carlisle and Penrith in Cumbria and Canonbie in South West Scotland.

They did such a superb job – finishing ahead of schedule – that the house they built is to be used as the show home for our award-winning Magellan Park development. The apprentices also received an award from the LABC for the standard of their work.

The show home was officially opened on Wednesday 18 January 2012 when Copeland Council leader Elaine Woodburn performed a ribbon-cutting ceremony. Speaking at the ceremony, Story Homes’ chief executive Fred Story. said: “The apprentices have done a fantastic job. I didn’t expect them to do it as well as they have done or to have learnt so quickly. It is a great example of what young people can do.”

The first of three one-hour episodes of the television series will be broadcast on ITV4 at 9pm on Monday 19 March 2012. The programme’s title has yet to be confirmed.