Yesterday, Tuesday 10 March, seen the hard work and efforts from the pupils of Petteril Bank Community School put to the test. The children held a charity race event in school for the kit cars that they had developed and designed themselves, inviting parents and carers along for support.

The school children have been taking part in the Centre for Leadership Performance’s Bright Stars competition which gives schoolchildren £50 to invest and grow by putting their entrepreneurship skills to the test. The winner amongst the Cumbrian schools taking part is awarded £1,000 for the charity of their choice.

The group of ten and 11 year olds from Petteril Bank Community School decided to organise today’s race event in their bid to win the competition and it included refreshments for visitors, three car races and then a raffle draw.

The pupils split into five teams and procured sponsorship money from local businesses for their cars: Story Homes sponsored the car for Team BFCCL and romped home to victory in one of the races. 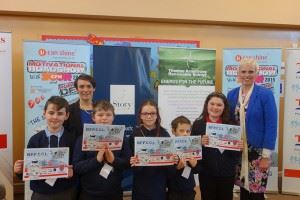 The event this afternoon was officially opened by Robbie Dee of CFM Radio, then the races were underway.

Race 1 – Speed Race – Team BFCCL started well on the Speed Race and was in the lead until the very last minute until they were pipped at the post by the B Team who took first place. However, all was not lost – Shelley Hayward, Learning and Development Manager at Story Homes got to take second place on the podium.

Race 2 – Off Road – The Story Homes’ car raced to victory in this event. Even after being given a three second penalty point by the judge, Team BFCCL still managed to take first place on the podium.

Race 3 – Tunnel – All was lost in this last race. Unfortunately, the car experienced a hiccup before the race had even started. It lost a small part which was fixed, but again tragedy struck later on, just before the last tunnel and the car broke down once again. Team BFCCL came fifth.

The pupils has organised and designed the races themselves and they should be rightly proud of themselves as everyone who attended had a great afternoon.

The winner of Bright Stars is announced next Tuesday (17 March) by the Centre for Leadership Performance. We’ll keep you posted!

Story Homes is often involved in supporting community projects and to find out more about our past activities visit our website.