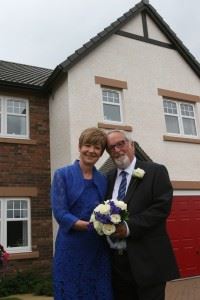 Creating their own love story Newly-weds Tony and Monika Grant got married in their own home on Saturday inviting their Story Homes advisers to the wedding.

The couple were wed in a humanist ceremony in the garden of their Story Home in Dumfries surrounded by their family, neighbours and Story Homes advisers Ann Taperell and Fiona Ure. The home is the first place the couple lived in together after falling in love on a cruise ship.

Tony said: “Monika and I met on a boat in Casablanca – we had both lost our other halves.  I’d had been taken there by my friends to take me out of my depression after losing my wife and Monika was going through the last stages of separation. The night we met I was talking, in a group, to a friend, Felix, until around 3am in the morning – we’d drunk a lot of brandy – and Monika was the only sober one.

“Felix couldn’t get to his cabin so Monika helped him and on the way back I met her at the end of the corridor. I thought she was going past me, and she thought I was going past her but we ended up walking along together. It turned out on a ship with 3,800 passengers our cabins were next to each other which seemed a fantastic coincidence. We met up to go shopping the next day and things went on from there.”

After the cruise Tony returned to Belgium, where he was living, and Monika returned to Switzerland, where she was based, but the pair resolved to get together shortly afterwards. Following a brief meeting in Belgium Tony suggested a next encounter in Scotland. He explains: “I grew up in Moffat and I was returning to Scotland to see my aunt Jill in Ayr – so I suggested that Monika and I meet up there.

“We were driving along and we saw the Story Homes sign and we said ‘why don’t we have a look here?’.”

The couple went into the Story Homes development at Summerpark, Dumfries, in January last year and met sales adviser Ann. Tony recalls: “We asked Ann ‘do you have any houses for sale?’ and she took us straight to the plot that we now live in.

Ann recalls: “I clearly recall the day Monika and Tony came in – as it was one of the quickest reservations I’d ever made. They made their mind up and came straight back the next day. They are such a nice couple and it was a real privilege to be able to help them with their new home. As far as we’re aware this is the first wedding ever to be held in a Story Home so it was lovely to be asked to be a part of their special day.”

The couple moved to Dumfries in March 2013 and immediately settled in so when it was time for them to choose where to get married the decision was simple.

Monika said: “We said ‘we are not religious so why don’t we get married at home?’. I really enjoy the community here – I have my beautiful garden and my beautiful husband.”

Tony added: “Ann is so good at her job, and all the Story Homes staff are so friendly that we thought we must invite them to the wedding.”

Ann and Fiona joined the couple on their wedding day on Saturday, June 14, where the June sun broke through the clouds for a beautiful garden ceremony. Ann said: “It was a fantastic day the minute we walked over to the house the sun came out and it was baking hot. It really couldn’t have been a nicer day.

Monika finished: “Ours is a real love story and it is perfect here at home for beginning our new life together.”