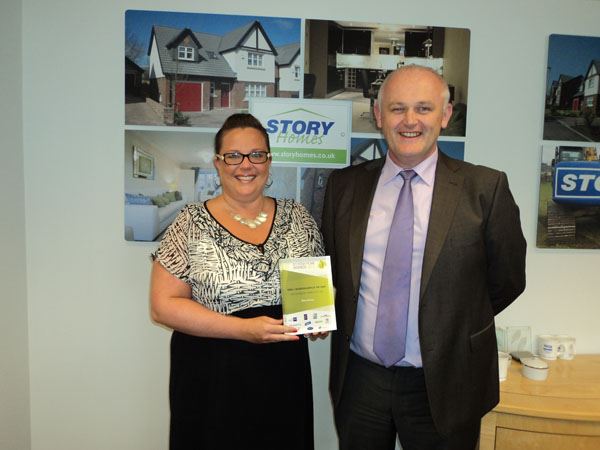 Twenty four winners were announced with Story Homes coming runner up and ‘highly commended’ in the Small House builder of the Year category that recognises companies building less than 600 houses per year. Others shortlisted in the category included Mactaggart & Mickel Group, Red Door Cottages, S1 Developments (winner), Springfield Properties and The Walker Group.

The Carlisle based house builder has a flag ship development in Dumfries where it plans to build a further 300 houses over the next 10 years. Story Homes has been shortlisted in the awards for three years running and holds the accolade of winning the Scottish Home 2010 ‘House of the Year’ award as well as a string of other awards.

Ian Sewell, Managing Director at Story Homes collected the award, commenting “It was a great evening and we were delighted to be named runner up and highly commended in these awards which cover the whole of Scotland and highlight the best developers, of which there are literally hundreds. We typically construct around 150 houses per year. 2012 sees us celebrate our 25th anniversary and we continue to expand in Scotland with a new development of 280 properties scheduled to start this time next year in Biggar. As well as our popular development in Dumfries, our Lockerbie development has been a great success with all but three houses left for sale.”

The event was hosted by BBC Scotland’s Catriona Shearer and Dougie Vipond with special guest comedian and writer, Simon Evans.

Not only has Story Homes being acknowledged for its high build standards but two of their Site Managers swept the board at the recent LABC warranty awards in Newcastle, winning first and second in the much coveted Site Manager’s category.

Duncan Chisholm and Mark Irving who respectively manage Magellan Park, Whitehaven and Edmondson Close, Brampton, were understandably delighted to be placed first and second in the regional finals. Duncan and Mark were assessed on their high standards in managing and delivering successful developments. Between them they have over 20 years experience working for Story Homes.

Ian added ‘We’ve had an exceptional two weeks of awards. There aren’t many home buyers who can boast that an award winning Site Manager built their house or that they live on an award winning development, but most of our buyers can. We have a great team on-site and their dedication and hard work is recognized through the winning of these awards. Both Duncan and Mark are deserved winners and we wish Duncan success at the national finals.’