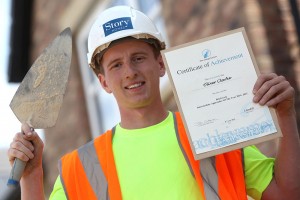 He was given the award by New College Durham in recognition of his dedication and hard-work both at work and college.

Oliver, who lives with mum Judith Clarke, an accounts manager, 52, and his brother Matthew, 23, a laboratory technician, said: “I was recruited through a work experience placement.

“Richard gave me a two week trial, he was impressed and took me on from then.

“I wanted to do an apprenticeship as I wanted to start earning money while learning a trade, and with this I knew there was going to be a job at the end of it.

“Since working for Story Homes and Richard I’ve got a lot more confident in myself and been able to communicate much better on the site.

“I’m learning much more than just brick work, I’m seeing what joiners are doing and other skills like the groundworks. 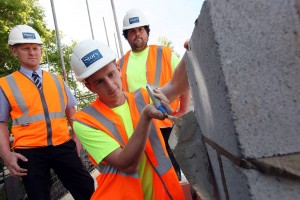 “Eventually I’d like to complete a HND and go on to be a contracts manager or a civil engineer.”

“He came on a two weeks’ trial and that’s when I realised how valuable an apprenticeship would be, so I worked with New College, Durham.

“There is a fantastic atmosphere on site at Shotley Bridge – it’s very much a team effort and everyone works together to get the job done.

“It’s been the ideal place for Oliver to learn and he’s taken every opportunity he has been offered by the team.

“My future plan is to recruit one apprentice a year – I see it as a way to give something back to the community and also in some small way to help tackle unemployment issues in the area.

“It’s also a great way to develop staff and create a great team and I’m delighted we can offer apprenticeships to talented people like Oliver.”

Gary Turney, site manager for Story Homes, said: “It has been a real pleasure having Oliver on site.

“From his first day he’s shown dedication and application to his work.

“Story Homes is a great supporter of apprenticeships and we encourage our contractors and suppliers to support them in any way they can.”

Oliver said: “I was over the moon to win the award as it showed that all my hard work had paid off and that people had noticed how hard I’d been working.

“My mam was thrilled, it was great for her to see what I’d been up to – I also got a trophy and a pay rise for doing so well.”