Over £2000 has been raised for the Eden Valley Hospice following a gruelling 50 mile bike ride taking in one of Cumbria’s toughest mountain climbs.

The bike ride, organised by Luke Walker, an engineer at Story Homes, followed some of the course set by this year’s Tour of Britain – including the long and arduous climb up Hartside Pass in the North Pennines. 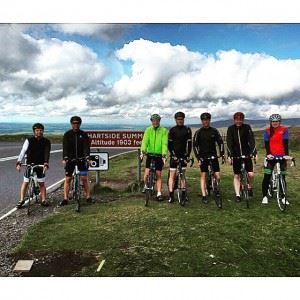 Seven riders tackled the course, all from Story Homes or sister company Story Contracting. This is the second annual charity cycle ride organised by Luke and Story Homes and is part of the company’s charitable giving programme.

Speaking about the five hour bike ride, Luke said: “The ride was a great success and enjoyed by all – so much so that we rode an extra six miles after accidently missing the turnoff home after speeding down Hartside Pass. It wasn’t in the plan, but the descent was fun!

“A big thank you goes out to all the riders who took part in the ride. Also, huge thanks to all the people who gave generously to the cause. We hope the money raised will make a big difference to the Eden Valley Hospice.”

The ride started and finished to the east of Carlisle, near Wetheral. The riders crested 1,903 feet at the ride’s highest point – and some took advantage of England’s highest café to recover from the ascent.

The team riased over £1000, with Chairman Fred Story match funding their efforts, taking the total tyo more than £2000. Eden Valley Hospice is the nominate’Charity of the Year’ for Story Homes and Story Contracting, chosen by colleagues.

There is still time to contribute to the fundraising effort – the Story Homes cycle ride has a Just Giving page: www.justgiving.com/StoryHomesRide.