It proved to be One Great Day

Colleagues from Story Homes took part in an intense and challenging cycle ride to raise money for charity.

In June, The Lanes Shopping Centre in Carlisle held the ‘One Great Day’ event which sees teams from local businesses compete against each other in a static bike ride to raise money for Great Ormond Street Hospital (GOSH) and Jigsaw, Cumbria’s Children’s Hospice. 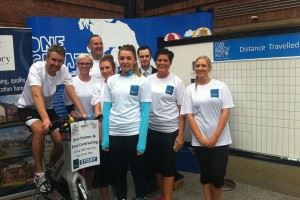 The Story Homes team about to set off

The challenge was to cycle 308 miles – the distance from Carlisle to GOSH. With ten team members, including Chairman Fred Story, the Story Homes’ team was on the starting blocks with teams from Debenhams, Next and Pirelli amongst others and competition was fierce!

Lisa Gallimore, Office Manager and Executive Assistant to CEO organised the team and said: “When we signed up to take part in this challenge, we thought it was going to be easy; however everyone’s competitive spirits came out and we threw ourselves in to the challenge wholeheartedly.

“Cycling through the night was a tough test, but our staff’s great team spirit meant we all pulled together and everyone worked their hardest. We really enjoyed ourselves while raising money for two worthwhile charities.” 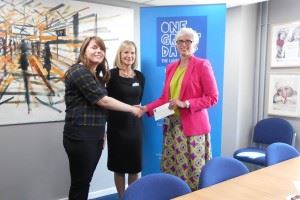 The Story Homes team raised a magnificent £406 in total and Karen Graham, PR and Communications Advisor attended a cheque presentation event held by The Lanes Shopping Centre. The grand total is still to be announced.

Story Homes and Story Contracting colleagues chose Eden Valley Hospice and Jigsaw Cumbria’s Children’s Hospice as a charity partner for the year. The fundraising activities kicked off in April with both companies raising over £600.

Each year staff from Story Homes and Story Contracting choose a charity partner for the year and are proud of their fundraising efforts. More information is available here.