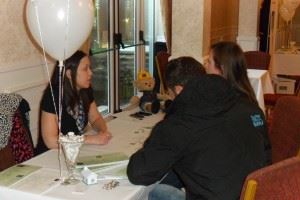 ur newest development in Cumbria was launched last week, with a queue of people waiting to buy a Story Home.

Whins Farm Close in High Harrington had a mailing list of more than 350 people waiting for more information about the 75 houses. The exclusive pre launch event for those who registered on the mailing list was held at Hunday Manor or Thursday 17th and Friday 18th October.

Within the first hour of the launch, four houses had been reserved. By the end of the two day launch, eight homes had been sold and more than 150 people had been through the doors looking for more information.

Matthew Pearson and Marie Rudd were over the moon after purchasing their first home together. The couple were the first through the doors of the launch event and they have been renting a house while saving up for a deposit.

Matthew, 38, said: “We had been saving for a while and when we heard about the 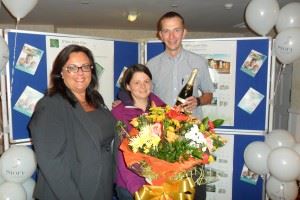 development in High Harrington we decided to come down to find out more. We had already visited some Story Homes show homes elsewhere in Cumbria to get a feel for what we were going to get. The new development is handy for both of us to commute to work and the three bedroom semi detached house is perfect for us.”

Matthew and his partner Marie, 33, were presented with flowers and champagne to celebrate being the first buyers at Whins Farm Close.

Ryan Close and Melissa Davidson were the second buyers on the development. The couple were already renting together in Workington but felt ready to take the next step and get a foot onto the property ladder. Ryan, 26, a building surveyor for WYG in Cockermouth, and Melissa, 23, a newly qualified nurse at the West Cumberland Hospital in Whitehaven were looking for a home which was within commuting distance for them both. After finding about Whins Farm Close in High Harrington, the couple came along to the launch event and reserved a three bedroom semi detached home.

Melissa said: “We are both newly qualified and have been renting but we wanted a place of our own. We like the area of High Harrington and it is right in the middle for us both.”

Louise McGuckin, Head of Sales said: “We have seen a lot of early demand in all of our sites, but Whins Farm Close in particular has proven very popular. The launch event allowed us to meet with our customers and give them all of the information they needed in one go, including advice from an independent financial adviser. We are seeing real evidence that the market is picking up and we are already receiving enquiries about our other coming soon sites across West Cumbria, including Stainburn.” 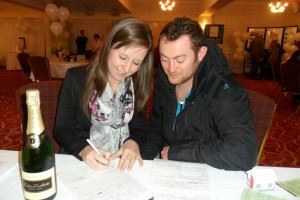