Story Homes’ Plans to build 300 new homes on the edge of Preston at Eastway have taken a significant step towards becoming a reality.

Story Homes has reached a legal agreement acquire the land from the Homes & Communities Agency (HCA), which is a key milestone ahead of any building work. We were granted planning permission for the development of the 20 ha site by Preston City Council earlier this month. Now, having exchanged contracts with the HCA, we can focusing on developing a timetable for construction on the site, which will be known as D’Urton Manor.

Martin Nugent, Planner for Story Homes said: “We worked closely with the HCA, Preston City Council and Lancashire County Council to bring forward a quality scheme which will be in keeping with the character of the local community.

“We are well known for designing and building award winning family homes and are delighted that Preston City Council has seen the benefits that the scheme will bring. These include job creation and security for local subcontractors and a knock on effect for the local supply chain.”

We will build a mix of high quality, family homes ranging in size from two to five bedrooms. This includes 45 affordable homes, which will support the local authority to meet local housing need. A payment in excess of £2 million towards providing affordable housing elsewhere within Preston will also be made.

The location already had outline planning permission which the HCA secured for a mixed use development comprising of up to 300 houses, employment land, a district centre and open space provision. The mixed use element of the scheme will come forward once the housing development is underway.

Eastway is one of 11 sites the HCA is bringing forward for housing development within the Preston, South Ribble & Lancashire City Deal, and is the second development site which Story Homes and the HCA have agreed terms on in the last 6 months.

Deborah McLaughlin, Executive Director, North West at the HCA said: “Increasing the supply of new homes and creating attractive places to live is our number one priority. So it’s great to see HCA land being used at Eastway to achieve this aim for the City Deal. Combined with their acquisition of the nearby Cottam Hall site, Story Homes will be delivering in excess of 500 homes on HCA land in Preston in the coming years which is fantastic news. This will not only increase housing choice, and attract investment but also create jobs and support the local supply chain.” 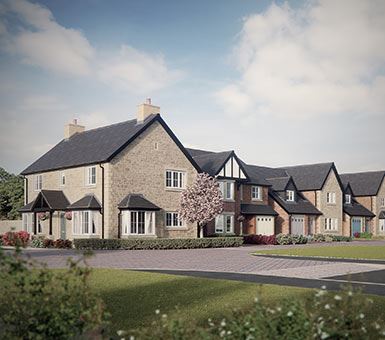 A CGI of other new Story Homes in the area at Waterside, Cottam

The City Deal is an agreement between Lancashire Enterprise Partnership, Preston City Council, South Ribble Council and Lancashire County Council, along with central government and the Homes and Communities Agency (HCA). The City Deal will deliver nearly 17,000 homes in central Lancashire over the next 10 years of which the HCA will deliver approximately 5000 homes on land they own.

Jim Carter, Chair of the City Deal, said: “We’re pleased that this agreement has been reached to bring new homes to Preston. It’s yet another example of how City Deal is already making positive changes in the area.

“One of the key aims of City Deal is to create homes for people to meet the future needs of the area. The City Deal will bring new jobs, so it’s vital that we create the communities where people can live, as well as improving existing communities.

“The aim of the City Deal is to unlock the economic potential of the Preston and South Ribble area, creating new jobs and making it easier for residents and businesses to get around. It’s an exciting time for the area and we’re determined to make the most of this once-in-a-lifetime opportunity.”

Story Homes will make financial contributions towards transport links, which include improvements to foot paths, cycle paths and highways and public transport provision.

We currently has another site under development within the Preston area, at Cottam which is owned by HCA. The development of 283 homes known as Waterside, due to its attractive location overlooking the canal, will feature a mix of mix of two, three, four and five bedroom properties.