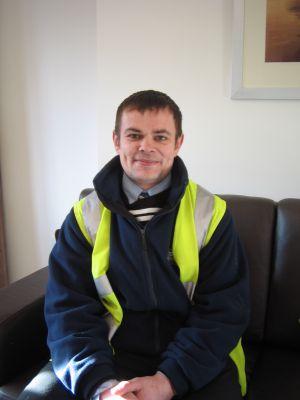 Site managers working on two of Cumbria’s most significant housing developments have been shortlisted for industry awards.

Duncan Chisholm and James Arnison of Story Homes have been recognised in the Local Authority Building Control (LABC) Excellence Awards.

Duncan, who manages the Magellan Park site in Whitehaven and James who manages the Birkbeck Gardens site in Kirkby Stephen, will go up against other nominees in the regional site manager category in June.

Duncan, 34, (pictured) who has worked at Story Homes for more than 12 years, was the northern regional winner in the same awards in 2012. He also became a local celebrity after appearing on the ITV4 ‘Rookie Builders’ series, where he mentored 22 apprentices as they took on the challenge to build a four bedroom detached house in just 12 months.

James, 45, has worked for Story Homes for three years, previously managing a site in Lockerbie and winning two Premier Guarantee industry awards for medium sized development of the year and best developer of the year.

All LABC warranty registered site managers working on sites of three or more are eligible for the awards. It is a rigorous process and LABC judges carry out on site assessments to determine the shortlist. They look at all aspects of site management, particularly construction and technical building including innovation, creative solutions, difficult sites and technical issues. They also consider health and safety, site tidiness and administration. All nominations are then reviewed, assessed and shortlisted by LABC area managers.

Richard Cannon, Contracts Manager at Story Homes commented: “Having two of our site managers shortlisted in these prestigious awards is fantastic news. They both deserve the recognition for their excellent management of issues on site and their dedication to building quality homes.”

Duncan of Carlisle said: “To win in 2012 and to be shortlisted again in 2013 is a great feeling and it is nice to be recognised for what you do. Magellan Park is a fantastic development site to work on and we have a great team which makes running it much easier.”

The LABC awards take place annually and reward excellence in all aspects of the regional building industry. The LABC promote the design and construction of buildings that are safe, accessible and environmentally efficient to comply with the building regulations. They work with various bodies to support innovation in building.

Winners of the regional awards will go forward to compete for the national title later in 2013. For more information about Story Homes or any of our developments visit www.storyhomes.co.uk.