The Story Homes Kendal and District Football League has seen an increase in its membership since receiving funding from Story Homes. Funding was given to the league last year before the football season kicked off in September and the money has been spent on several key requirements for the league, including FA affiliation fees, a trophy and advertising.

Daniel Ferguson, organiser, says: “The money we received from Story Homes has not only helped us increase our member teams but the advertising has also meant the number of spectators to matches has grown. Turnout is great every week, whether it’s raining or snowing! Morale is high.”

The league has six teams currently playing in the league and interest is growing from other teams to join. Players are aged from 16 and onwards, the eldest being 51 and the league are certainly not putting an age limit on playing football to keep fit and healthy. 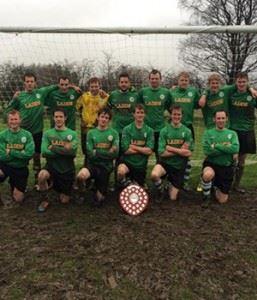 Matches are played every Sunday morning in the local area. The league has two cup matches and therefore two winners every season: the first half runs from September to December with the second running from February until May. Daniel was so pleased with the cash injection to help his league to become successful: “I would like to say a big thank you to Story Homes – it’s given us a lot of help and it really is much appreciated.”

Story Homes has always been a family-orientated business with a philanthropic outlook – encouraging and enhancing community teams and facilities. Our new development The Beeches sits close to the town centre of Kendal and our ethos is to support community projects close to where we are working.

We have supported a number of teams, clubs and sports activities across the regions we work in and to find out how we’ve helped others over the years, click here.