Northbank FC step out away from home in stylish shirts

Story Homes is proud to be the newest sponsor of local football team Northbank FC. 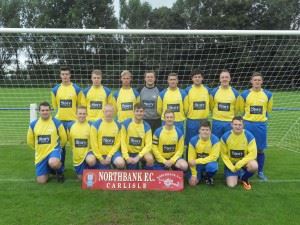 Thirteen local companies entered the draw and Story Homes won the opportunity to sponsor the Carlisle club’s away shirts. The home shirt sponsor was won by Gas Services Assured.

Northbank FC was founded in 1970 and play their home games at the Sheepmount, Carlisle. The first team had two successive promotion seasons to re-gain their Northern Alliance Premier Division status. The club also has a thriving youth section with 17 junior teams, including boys and girls.

They have already had some success in their new shirts, narrowly beating local rivals Carlisle City 0-1 in the League Cup. Northbank FC will play Heddon in the next round.

Northbank FC spokesperson, Peter Shepherd said: “We are proud to have the club associated with these two successful local companies. We felt that the draw was a novel way to get new shirt sponsors and the winning sponsors were drawn at one of our monthly committee meetings.”

The team travel across the North East of England for their games, playing team in places such as Gateshead, Whitley Bay, Seaton and Blyth.

Catherine Cannon, Marketing Manager at Story Homes said: “Northbank are a great local amateur team and we are proud to be associated with them. The team are playing away in areas where we are building stunning new developments so it is also great to get our name known in the North East. We have always been keen to support the communities in which we work and we look forward to watching the ongoing success of the club in the future.