Following the announcment by the NHBC (National House Builders Council) about the eight-year high in new build registrations, Story Homes has announced its plans to build 800 homes in 2016/17 across the North of England and South Scotland

The ambitious strategy follows the construction and sale of approximately 600 homes in 2015/16 financial year and promises to have a significant impact on the region’s current economic and employment status.

Story Homes has pledged to directly recruit 100 individuals this year to cope with the industry’s increase in housing output.

Moreover, according to the Home Builders Federation, each home built within the UK is estimated to support the employment of four individuals. This is through the provision of subcontractors, supply chain and improvements made to the local economy in order to cope with the demands of an increasing population.

The industry body’s estimations advocate that Story Homes’ 2016 construction drive will support the employment of almost 3,500 individuals, in addition to generating over £1 million towards education – a figure which could provide over 300 classroom spaces.

Steve Errington, CEO of Story Homes, commented: “As the housebuilding industry continues to increase its output at the most rapid rate for years, it’s vital that we remain committed to providing the region with the high-quality homes it so desperately requires. 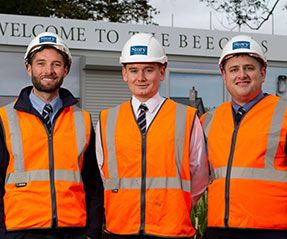 “Growing demand for family homes allowed the industry to recruit and train over 100,000 individuals during 2014/15. Story Homes is extremely proud to play a part in what I’ve no doubt will be another record year in terms of job creation for the industry.”

This year, the developer is looking to recruit 12 apprentices in both joinery and bricklaying across Cumbria, the North West and the North East and will also be launching a graduate recruitment scheme.

Steve added: “As Story Homes continues to expand, it’s important that our core values remain central and I’m dedicated to ensuring that any new recruits are as committed to quality as we are.”